Our longings are God’s longings — that every person on the planet has a realistic opportunity to hear the gospel.

For the first time, Converge missionaries from North and South America all gathered in one place for a time of vision casting and connecting as friends and colleagues.

The main sessions of the Nov. 5-8 regional gathering in Puntarenas, Costa Rica, were organized around the Converge International Ministries’ vision statement: We are asking God for a gospel movement among every least-reached people group in our generation. Gary Hunter, director of Global Ministries, and Kevin McGhee, director of U.S. Engagement, each focused on a part of that vision.

“Discussing our vision together is a great reminder that we are part of something bigger than ourselves. And hearing the wonderful progress taking place is such an encouragement that God is on the move to fulfill that vision,” said David Connell, Latin America Impact Team director.

Breakout sessions allowed attendees to connect with the U.S. Engagement Team, Member Care Team and Ministry Specialist Team. The breakouts enabled missionaries to hear about the specific purpose of each team. They also got a sense of the big picture organizationally and how each team relates to and complements one another.

The schedule encouraged conversation over meals and during ample free time and fostered connections with people who were mostly unknown to each other before the gathering. Those conversations provided a sense that no one is alone in their endeavors and that we truly are better together.

Another way people connected was through daily hour-long table talks.

“I really liked the table talk times because it was great cross-pollination and great ideas,” said Beth Roberts, who, along with her husband, David, has recently been called to serve in Montevideo, Uruguay, after eight years of ministry in Argentina. “I could have done that for three hours straight.”

Taking the gospel to the least reached

Time was given to celebrate the gospel impact our missionaries are making.

In 2016, Converge had 125 missionaries. Now, we have 183 missionaries — with over 50 more in the pipeline. Sixteen initiatives have been defined, and clear outcomes have been established. The goal is to have 20 fully staffed and funded initiatives by 2027.

Impact Teams in each of our regions (Sub-Saharan Africa, Asia, Europe/Mediterranean, Latin America and North America) are encouraging and enabling national leaders, helping them to move forward to reach the least-reached peoples in their context.

A portion of the first two evening sessions was spent hearing from North and Latin American initiative leaders.

John and Kathie Pederson and Bruce and Julie A. spoke about the From Scattered to Gathered Initiative being launched in Minneapolis/St. Paul, Minnesota. The initiative’s projects will target various ethnic and cultural groups that will seek to reach Muslims, Buddhists, Hindus and secular groups who are settling in the Twin Cities as part of the global diaspora.

Jonathan Mathews discussed the goals and progress of the Southern Cone Initiative, which is helping to establish gospel movements among the least reached of southern Brazil, Argentina and urban Uruguay.

While the missionaries were connecting, there was a full children’s ministry program planned and executed by a team from Epikos Church, Milwaukee, Wisconsin. The church covered their expenses to care for the 15 children in attendance.

“Our kids had been looking forward to this conference all year because they knew they were going to be with other MKs and they would understand each other,” Beth Roberts said.

The gathering also provided the opportunity to celebrate the retirement of two missionary couples: Eric and Janet Johnson and Scott and Ruth Millar.

The Johnsons first moved to Mexico City in 1982. Eric planted a church in Mexico City in their first term. After a home assignment, the Johnsons returned to build relationships with nationals, taught seminary and have spent the past 35 years developing ministry leaders in Latin America. 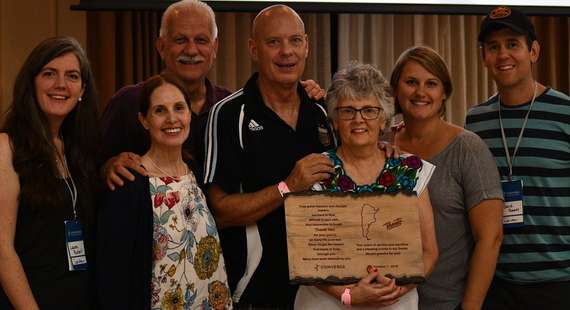 For 25 years, the Millars ministered in Argentina, starting churches throughout the northwest provinces of Santiago del Estero and Catamarca. In November 2014, God led the couple to Toronto, Canada, to work with the immigrants coming from Latin America.

The missionaries in attendance left the gathering feeling equipped and energized for future ministry.

“This meeting was such a blessing to our whole family. It refreshed and ministered to us right when we needed it,” Stephanie Connell said. “We thank God for the Converge family and the amazing people he has brought into our lives to guide us, walk alongside us and inspire us in the journey.”

Learn more about Converge International Ministries and how you can be a key partner in accomplishing God’s mission.

Tom Castor is a member of the Converge International Ministries Ministry Specialist Team. He and his wife, Lee, are the founders of Clear and Simple Media.

How you can pray for missionaries today