Rarely do decisions come easily when they could potentially impact the eternal salvation of people worldwide who have never heard the life-changing gospel of Jesus Christ. And while there were plenty of prayers and discussions that went into the decision to replace Gary Hunter, who was retiring as Converge International Ministries’ director of global leadership, the decision to elevate Carl Lahr into the role became as close to a no-brainer as any decision before. 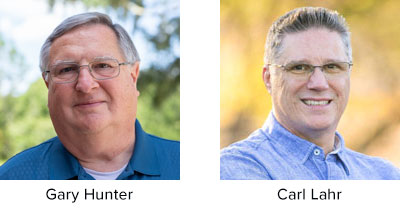 Hunter spent just over four years in the position after coming to Converge in August 2016. He was instrumental in crafting Converge International Ministries’ often-repeated vision: We are asking God for a gospel movement among every least-reached people group — in our generation. The statement has become a rallying cry that guides Converge’s approximately 180 global workers as they labor to reach the people who have never heard of Jesus’ first coming, even as we anticipate his second coming.

It also gave the International Ministries team clarity and alignment it had never had before.

“There was never a cohesive vision, a sense that we are all going to be a part of doing something together,” said Ivan Veldhuizen, Converge executive director of International Ministries.

Hunter likened the situation to placing people in a circle with their backs to each other in the middle of the United States, loading their shotguns with missionaries and shooting them into places around the world with no rhyme or reason.

“So, finding a way to help our missionaries come together and work on something bigger than themselves and do things they couldn't do alone was a critical element. We already knew why we existed – to start and strengthen churches together worldwide – but we needed to answer the question of What is it that we believe God wants us to get done?”

Hunter and Veldhuizen met with other International Ministries leaders, and after refinements, the current vision statement was adopted in 2017. Global workers immediately embraced the statement and the opportunities that came with it.

“There was high buy-in, and it caught on quickly,” Hunter said. “There was really strong appreciation from the global workers. I’m sure some of them had questions, but we tried to roll it out with a lot of dialogue.

“From there, we just made sure that everything we were doing was adding to that vision statement, including getting the right leaders and a good structure in place to support where we are going. The leadership and the structures are going to help you get there, and building those is the process that is happening now.”

While vision clarity has helped align the International Ministries team, leaders have noticed an unintended consequence of the statement.

“Most of the younger generation wants to be a part of something we all do together,” Veldhuizen said. “We are a developing and equipping organization. With the leadership pipeline we have, everybody knows their supervisor isn’t there to do paperwork; their supervisor is there to pour into their lives and help them become more effective. They know that their supervisor will help them develop into their most significant potential as a leader, too.

“Most other missions organizations are having a challenging time finding young missionaries. We aren’t. Young missionaries really love what we are offering now, and we’ve never had that before. Gary played a role in helping us get to that point.”

Related: How you can become a missionary

But doing so hasn’t been easy. Making sure the right leaders are in the right places has been crucial to building the momentum that Converge International Ministries is enjoying. In the past, there wasn’t a leadership culture built into the department’s core, and global workers were sent onto the field without the same support and level of accountability they now enjoy.

“There was no pipeline for developing leaders and placing them in the right spot,” Veldhuizen said. “We never had that. So, we had potential leaders that had never been identified and people in places where they were never given a chance to step into more significant leadership roles.

“But our staff calls Gary, ‘the Great Inquisitor,” because he can drill somebody for hours with questions about who they are, how they’re wired, what gets them excited, what they have learned through successes and failures. Through that process, he helped us identify people who had what it took to lead in some key leadership roles.”

As Lahr succinctly put it, “Gary’s sweet spot is coming in where there’s nothing and helping people see a vision and mission ― and then helping them build the structure they need to serve that vision and mission.”

Carl picking up where Gary left off

Lahr has known Hunter as a friend, pastor and work supervisor for more than two decades. The two worked together at Global Outreach before Hunter joined Converge and later encouraged Veldhuizen to bring Lahr on board in 2020.

His principal role now is leading Converge’s primary international leaders in the five regions of the world (Africa, Asia, Europe & the Mediterranean, Latin America and North America) and its member care team leaders, helping them reach their highest leadership potential.

According to Veldhuizen, Lahr’s skills are an exact match for the position now and in the immediate future.

“Carl is probably the perfect person to pick up where Gary left off because Carl doesn’t do what Gary did, but Gary doesn’t do what Carl does,” he said. “Carl has the beautiful ability to work with leaders of all different sorts. He helps them develop in their leadership capacity, brings tremendous clarity to what we’re doing and keeps people aligned with who we are. He’s always thinking about the long-term repercussions of our decisions in different parts of the world. He’s so good at that.

“Carl’s a great collaborator,” Veldhuizen continued. “It’s not because he’s a schmoozer; it’s because he really knows his stuff and communicates it well. He’s a straight talker. He’ll tell you the truth. Carl’s not going to agree with someone just because he thinks they want him to agree. He’ll say, ‘I don’t agree with that. Here’s why.’ I love that. That is what we need with somebody in that role.

“Carl is very disciplined,” Hunter said. “He follows through to get things done. He’s also good at helping build alignment in an organization. Over the years, he’s gotten to a point where he listens well and synthesizes well and can help find creative ways to keep things moving forward.”

Leadership development is vital to Converge International Ministries’ future endeavors and role in fulfilling the Great Commission. Lahr peppers his conversation with talk of building and multiplying transformational leaders. If we are asking God for gospel movements among the world’s least-reached peoples, the right leaders need to be in place and equipped to be shepherds along the way.

He points to established internal leaders of ministries (such as the mobilization team, which recruits and prepares new global workers; the U.S. Engagement team, which works with local U.S. churches who want to make a new or greater gospel impact through missions; the various special ministries such as those reaching diaspora in the U.S., Deaf populations worldwide and others through training, creating resources and other avenues), plus the leaders of Converge International Ministries regions, initiatives, projects and regional impact teams as critical to the future of the ministry. Building greater familiarity with them is his first priority.

Related: How your church can partner with Converge to reach the world’s least-reached

“What I’ve been most excited about is the way the international leaders have really welcomed me,” he said. “In this next year, I’m looking forward to getting more familiar with our staff, particularly our initiative leaders. Some of our international leaders have already invited me to travel with them to meet the leaders in their region, and I’m looking forward to doing that.

“Not getting a chance to do that earlier (because of the global COVID-19 pandemic) has been disappointing,” he said. “But it keeps me in a learner’s posture. It helps me to keep asking questions so I can learn. I think that’s very helpful.  I’m hopeful that there will be opportunities to come alongside initiative leaders and international leaders and encourage them and help them determine what they need.”

Veldhuizen said that ability and desire to help leaders move forward made Lahr an easy choice to replace Hunter. He already had the trust of others.

“Every one of our directional leadership team members said Carl would be a great fit. Carl did that in a year just by being who he is. It was the easiest transition you could ever have in leadership.

Learn more about how you can become a missionary or how your church can start or grow its missions ministry.

Disciple-making where the past and future collide