When you were a child, what did you want to be when you grew up? Many children aspire to being a police officer, a doctor, a teacher or maybe a superhero. And yes, perhaps those first three professions equal being a superhero.

Sometimes people go into a career that has been their dream since they were a child. Other times, they may be well into adulthood before they find the career they feel called to do. Occasionally, before they reach adulthood, someone may know they want to work in ministry ― such as a pastor, church staff or missionary.

But what if God calls you to ministry work well after you’ve established a career in the secular world?

God uses all kinds of avenues and life experiences to move people’s hearts to further his kingdom. He can use any career as a training ground for ministry. There are so many skills that seamlessly transition into necessary ministry skills.

A big leap of faith

Dr. Bill McCaskill gave his life to Jesus as a veterinary student in 1975. For decades, he practiced veterinary services at St. Anna Veterinary Clinic in Elkhart Lake, Wisconsin. His practice thrived as he serviced dairy farms.

In the late 1980s, he was part of a launch team that started Community Church in Fond du Lac, Wisconsin. As time passed, he was involved with volunteer ministry while continuing his vet career. With an awareness of having spiritual gifts such as evangelism and preaching, in 2000 McCaskill felt a pull to become a pastor.

Even though McCaskill thought of the farmers he interacted with as his mission field, he felt God was calling him to ministry and a substantial career pivot into the pastorate. Usually a significant risk-taker, McCaskill found himself reluctant to follow this spiritual nudge because he had no formal ministry training.

So, he did what many of us might do when pondering major life changes. He talked it over with a friend. And during that conversation with his friend, Paul Johnson, he heard something he’ll never forget.

“I told Paul I had this agitation in my heart to become a pastor to reach the lost,” McCaskill said. “But I wasn’t sure, and I didn’t want to leave my vet practice. I didn’t think I was qualified to start a church.

“And Paul said, ‘Bill, I think it’s time to open your arms wider.’ Right then, I knew I had to take a big leap of faith.”

So, at age 50, Bill McCaskill became a church planter.

“It took God 25 years to get me ready for ministry,” he added.

Related: Do something today that scares you

Many of the skills McCaskill gained during a quarter-century in his veterinary practice translated into church planting. Learning to handle and navigate finances, managing a team and rallying people around one common goal are all important aspects of ministry and non-ministry vocations.

“There are a lot of similarities between planting a church and being an entrepreneur,” McCaskill said. “The biggest difference is God is the CEO when you plant a church."

In the past two decades, McCaskill has become a mentor and sounding board to those who felt God calling them to plant a church.

“I’ve worked with seven church planters, and most of them had a background in the business world,” he said. “They didn’t go to school for ministry. No matter what their career might be, I look for people who are not necessarily in ministry but are difference makers.”

And he passes on the wisdom he received to those who might think a career in ministry may be God’s next step for them.

“It may be time to open your arms wider,” he advises.

Related: Discern your calling, ministry fit and leadership capacity as a church planter

McCaskill emphasized he firmly believes when someone lays whatever skills he or she has at the feet of Jesus, he will use them for the kingdom.

McCaskill retired from ministry in 2018.

Wondering how it can all come together

Young adults may have a dream or a vision of ministry work but might not know what that can look like or how it can pair with their talents and passions. This was the case with Peter and Heather Hanson.

The Hansons are Converge global workers living in Poland. From a young age, each felt called to go into missions. And while both were unsure of their future careers, their individual paths to missions ran parallel to one another. 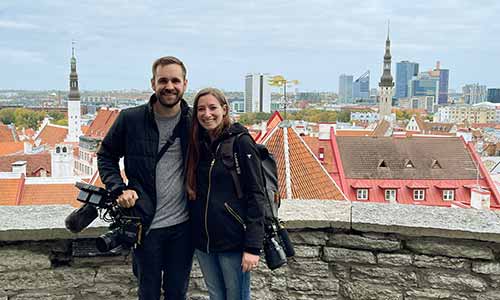 As a teenager, Heather believed she might someday become a missionary. She went on a couple of short-term mission trips that didn’t go very well for her. She felt these experiences meant it wasn’t God’s plan for her to become a missionary. Heather floundered a bit on an area of study in college. After four majors, she settled on writing.

Peter had a heart for missions and a love for film production, studying the profession in college. But it’s difficult to break into the business.

“I always felt called into ministry, and I loved film,” he said. “I hoped these two things would overlap, but I had no idea how.”

Over time, God made it clear to Peter that these two passions could work together in his life. They melded together when for two years he was first a production intern, then a staff member of his hometown church, Chapelstreet Church in Geneva, Illinois.

While at Chapelstreet, Peter had an opportunity to work for a week with a media production ministry in the Middle East. The experience led to a chance to go to Dubai to assist the ministry with another production.

“God really galvanized the vision and showed me an example of someone doing video ministry for years,” he said.

During her senior year of college, Heather landed a content writing internship at Hope International Church in Massachusetts. After graduation, she interned at Chapelstreet, writing scripts for the church’s videos and content for their website. She then found work at a non-profit.

As a married couple navigating their careers, they kept coming back to the same question.

“We’re both passionate about missions and communication,” Heather said. “How can God use us to combine those two things to connect people to become involved in spreading the gospel?”

The young couple decided to think big and made up their ideal dream job ― becoming global workers overseas and using their storytelling skills. They attended Converge’s Missionary Discovery and Assessment, and God brought everything together.

They now travel throughout 20 countries as part of a media team, creating videos for and about Converge global workers. These videos, such as the one below, appear on social media and Converge’s website and are shared with supporters to present the gospel-centered work of Converge global workers across the Europe/Mediterranean region.

The skills Peter and Heather learned in their work before becoming global workers have crossed over harmoniously for them. They use their storytelling techniques through the clear message they want to tell for global workers.

“We bring a level of professionalism to visual content that people out in the mission field don’t have the time or skills to develop,” Peter said. “The time we invest not only in our work but in getting to know global workers truly captures their story. This has a multiplying effect on their financial and prayer needs.”

Heather agrees that taking a step back to show love and care for the global workers and the people groups they serve adds to the joy of their ministry.

“All skills can cross over into ministry work,” she said. “The job skills we develop and hone are often better pathways into ministry.”

David Stott spent more than 40 years in a financial role as a business administrator with a for-profit business. In the 1980s, he had a conversation about ministry with a missionary couple. He told them, “I’ve never gone to school for ministry. I’m not a church planter. I don’t know how I could be of any use in mission work.”

Stott was like many believers, thinking most ministry work needed to be among the people or in front of an audience. Nevertheless, the couple encouraged him, saying he could certainly do work for the kingdom and explaining how administrative roles are essential.

He learned of a Christian publishing house that supported mission work in the Ivory Coast, West Africa, which produced Christian literature for French-speaking Africa. The organization needed help with its finances and business management. Stott helped the ministry get things back in order but felt that continuing in the work wasn’t suitable for his family at the time. So, he continued in his corporate career.

Several years ago, the software company where Stott served as CFO was sold. He wasn’t sure how the path forward with the company would look or if they would keep him around at all. After sharing his work uncertainty with friends John and Karen Ames, Converge global workers in Africa, Karen told Stott that Converge was looking for a regional business administrator to serve global workers in its Europe/Mediterranean and Africa regions.

Stott recently retired from his corporate job and assumed the role of business administrator for Converge’s Africa region. He now uses his four decades of business administration experience to support those on the mission field. By helping them remain financially healthy, Stott also helps their fieldwork continue uninterrupted.

And he finds great satisfaction in being behind the scenes for the work of advancing the gospel.

“Many people think international missions have a narrow set of responsibilities, such as church planting and discipleship,” Stott said. “Certainly, those are essential. But to make them happen requires a lot of other support services. And that’s where so many people can be helpful with the skills they have to further the work for Converge.

“Anyone who’s had a role in a non-Christian organization most likely has skills needed in ministry,” he continued. “A Christian organization needs a behind-the-scenes infrastructure, just like any other organization. And that takes people. So, if God’s placing a desire on your heart, it’s a good idea to explore where he can use you.”

Are you being called to a change?

Whether you’re an engineer, a truck driver, a salesperson or a childcare provider, so many skills and abilities can flourish in ministry work. If God is calling you to a career change, no matter what life stage you’re in, you may be asked to open your arms wider and step into new work. You’ll probably find that much of your professional experience is useful in helping people meet, know and follow Jesus.

And that’s even better than being a superhero.

Melissa Meyer is a freelance writer from Hudson, Wisconsin. She is also the administrative assistant to Converge Great Lakes’ executive director of Church Planting.

Overflow: You can’t give away what you don’t have