How digging latrines led to gospel work in Africa

In the 1980s, Brad taught in a Missouri public school while Deb finished university. But more and more, Christ’s love stirred their desire to serve people who didn’t know God.

So, Brad and Deb looked into options for their skills, training and desires. Two choices emerged: teach at an international school, which Brad didn’t want to do, or dig latrines.

So, in 1986, they went to The Gambia for two years. Brad taught people in Africa’s smallest country how to build sanitary latrines. Meanwhile, Deb supported missionary children learning through correspondence education.

“It’s not that we set out to say, ‘God’s called us to Africa,’” Deb explained. “We fell in love with the people, enjoyed the culture and felt a burden for these people who had no opportunity to hear the gospel in their language. God has kept that burden on our hearts.”

Brad agrees there was nothing mystical about their calling to Senegal two decades ago.

“Here’s a place that has great need,” Brad said. “God has given us gifts and experiences to meet that need, and we want to go. So, we don’t need a special vision from God to go. It’s already a match in our minds.”

That’s not to say installing latrines was a long-term match for the couple. Still, many other lessons and experiences in the small, independent country clarified God’s call.

For example, they started learning the Wolof language during their two years in The Gambia. Primarily, God used that to confirm why Senegal was perfect for them. Speaking Wolof also enabled them to practice evangelism without resorting to French, the language tied to colonialism.

The appetite for advancing the gospel can’t be satisfied

After two years in The Gambia, Brad and Deb returned to the U.S. They helped start a church in Wisconsin for four months before joining a Converge church in Fond du Lac.

While at Community Church, the couple heard about Dakar Academy, a school in Senegal for missionary children. In 1991, they agreed to teach at the academy for two years.

“It was a way for us to be in Senegal to see what opportunities were there for long-term service, whether at the school or somewhere else,” Brad said.

When that work ended in 1993, Brad, Deb and their two children returned to the States. They added three children to their family through adoption. During this time, they honed a desire to support indigenous church leaders and Senegalese ministries.

By 2001, their family adjustments and transitions had settled into a familiar identity and routine. So, they decided to rejoin the Dakar Academy staff. At that time, no Converge staff worked in Senegal.

However, 1500 miles to the southeast, a civil war had started in Ivory Coast in the early 2000s. So, Converge global workers Bruce and Julie Adamson moved to Senegal in 2004 for safety. Once there, the Adamsons learned that Senegalese people needed church planting work as the Adamsons offered in Ivory Coast.

Around this time, Deb and Brad affiliated with Converge. Then Bill and Kathy M. deployed to Senegal, followed by Tim and Mary Sue A.. These four couples worked together for 10 years in different locations.

Related: Read about Bill and Kathy’s journey into global work with Converge.

Deb and Brad wanted to do rural ministry as they did in The Gambia. So they moved in 2007 to northern Senegal, where they lived in a community of about 15,000 people. But they worked in farming villages of 50-300 people around the larger community.

“It was a dream come true to go to northern Senegal and work among rural people,” Brad said. “It was a great ministry as far as feeling at home and accepted by the people.”

Related: Opportunities for rural ministry in America are also crucial in Converge

There are centuries-old challenges to making disciples in the mostly-Muslim country. First, the people have been animists for hundreds of years. Then, around the 10th century, Islam came through the Fulani tribe.

“The obstacles, the challenges, the strongholds, the principalities ruling over Senegal are bigger than we could ever imagine,” she said. “If God’s people are not praying for him to work in a mighty way in Senegal, then we won’t see a movement happen here. A prayer movement precedes a gospel movement.”

“It was slow, a lot of seed sowing and very few people that came to faith,” Brad said of those 13 years.

Still, Deb and Brad are not doubting God.

“Those seeds are still out there,” he said. “We still pray they will someday grow and produce much fruit. You’ve got to think God’s more powerful. Our prayer is that through the work of the Holy Spirit, it won’t take that long for devotion to Jesus to take root.”

One of those seeds bears fruit. Abdou served in Senegal’s army, then moved to the Ivory Coast. He was estranged from his father for 18 years. He became a Christian in Ivory Coast through the witness of Steve and Carol Smith, also Converge global workers.

Then, Abdou moved back to Senegal and met Brad and Deb. He learned from them and joined them in ministry, and eventually reconciled with his family. Before Abdou’s wife died, she and his mother asked Abdou to stay a Christian and never practice Islam again. Today, Abdou’s father tells Abdou’s siblings they should live like their brother.

A new city, a new approach

In 2020, Brad and Deb moved to Thies, a city in western Senegal, to help lead the Metro SenWest Initiative. This relocation reflects a different approach for Converge staff in Senegal. They’re working to disciple indigenous people so the locals, like Abdou, can reach cities and rural villages more effectively than Americans.

“We recognized that we, with our limited time, resources and energy, needed to be strategically placed to mobilize nationals,” Brad said. “They don’t have as many barriers. So one of the things now is helping nationals catch a vision for a movement among their people.”

The new strategy has the same goal: seeing many of the least-reached people of Senegal know Christ within one generation.

Related: Converge’s goal is gospel movements among the least-reached.

“What we have learned makes us realize that we have to do something different than we’ve ever done before,” Deb said.

Like many places, God’s work happens through God’s word

An essential ministry tool for Brad and Deb comes through God’s word and dialogue with Muslims.

Brad said starting with the Christian Scriptures, such as the gospels, would turn Muslims away from Christ. So instead, he begins with the first five books of the Old Testament. 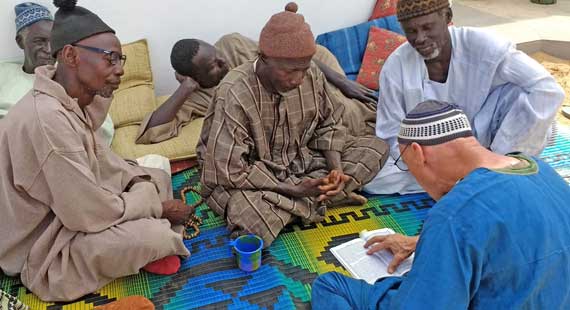 “Jesus said Moses wrote about me,” Brad noted. “There’s a lot about faith and trusting God and watching God work in Genesis and Exodus.”

Moreover, he said Muslims have been taught the Bible has been corrupted and changed.

“They are very hesitant to pick up a Bible and read it and study it,” he added. “You have to break down those barriers. I’ve found that starting in Genesis with prophets they already respect means there’s very little in those early books they’ll argue about or be offended by.”

Ministry among Muslims begins in the negative

A more modern barrier to making disciples comes because of American culture. Brad said that Muslims in Senegal and elsewhere often believe Christianity is the religion of immoral, dysfunctional Americans. American TV shows and barely-clothed, drunk tourists at the beach in Senegal form an image of Christians.

“When you work with Muslims in West Africa, you don’t start at zero,” Brad said. “You start at -50.”

Sadly, some also believe Christians get paid to become disciples. Such a belief limits how and where Deb and Brad can visit Muslim-background believers. Visiting indigenous disciples at the wrong time or place could imply Americans like Brad and Deb paid the believer to be a Christ-follower.

“In their minds, there’s no rational reason to leave the ‘true faith’ of Islam and become a Christian,” Brad said.

However, their work among indigenous believers has excellent potential for overcoming these hindrances. They can disciple people who can counter the arguments against becoming a Christian.

For example, Brad and Deb teach believers how to stay in their families after converting. That position and preparation equip the Muslim-background believers to show a transformation into holiness rather than a triumph of immorality.

The latrines are gone, but the love remains

Despite all the obstacles and challenges, God’s will is clear, and his love for the Senegalese is everlasting. Brad and Deb started learning the Wolof language while digging latrines. That unusual service started their global work.

God’s love for unreached people sustains their service in a new city with a new strategy.

“The word is already telling you to go and make disciples of all the ethnic groups of the world,” Brad said. “Unless he tells you to stay, you’ve already been told to go.”

Deb still has the same mindset she formed while following Christ in the 1980s.

“We’re already commissioned to go,” she said. “There have been really hard times, and yet God has kept encouraging us and kept that burden and that desire to stick through the tough times because of the greater need.”

Converge is asking God for a gospel movement among every least-reached people group – in our generation. Learn how we are playing a role in accomplishing the Great Commission and how you can be involved.